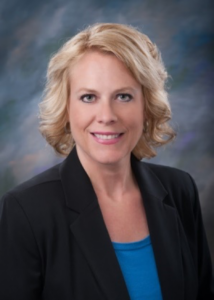 Andrea Krug Krauss is a graduate of Kansas State University with Bachelor of Science degrees in Accounting and Agricultural Economics and a Master of Business Administration. In addition, she is a Certified Public Accountant.

Since 2003, Andrea has been Secretary/Treasurer of John O. Farmer, Inc., a producer with operations throughout central and western Kansas. She has been an active member of the Kansas Independent Oil & Gas Association for 17 years and has been on the Board of Directors since 2013, serving as Chairman of the Federal and State Tax Committee and as a member of the Ad Valorem Tax Committee. She currently also serves on the Executive Committee as the Finance Committee Chairman. Andrea was the 2015 recipient of the KIOGA President’s Leadership Award.

Andrea also currently serves as Chairman of the Board of Trustees of the Sunflower Foundation, having been appointed by Attorney General Derek Schmidt in 2013. Additionally, she is on the boards of Russell Development, Inc., Russell PRIDE, Inc. and the Gamma Phi Beta House Corporation at Kansas State University. She also serves on the Russell Co. 4-H Program Development Committee and the St. John Lutheran Church Council.

Andrea has previously been elected to and served on the USD 407 School Board and the Russell County Hospital Board. Andrea has also served as Chairman of the Russell Area Chamber of Commerce and is a Past District Governor of Rotary District 5670/5680.

Andrea was a member of the 2019 class of Leadership Kansas. She was a 2019 recipient of the Rotary District 5680 Service Above Self Award, and in 2016, was the recipient of the Russell Area Chamber of Commerce Community Service Award.

She lives on her family’s farm southwest of Russell, along with her husband, Tom, who farms and ranches with her father. Her family raises registered Hereford and Angus cattle and produces wheat and grain sorghum. Andrea and Tom have one daughter, Katherine, who is a junior at Kansas State University.